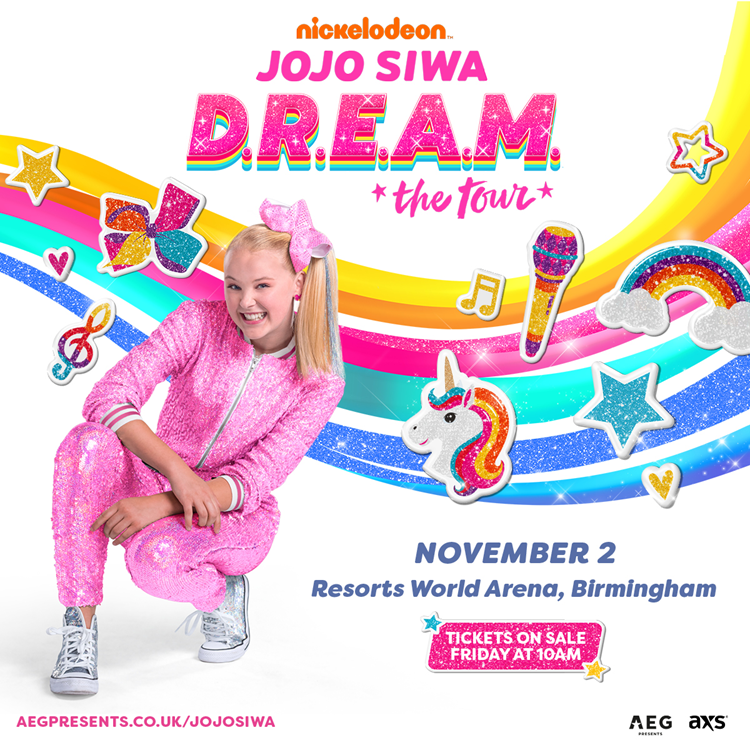 Nickelodeon superstar JoJo Siwa is a YouTube personality, singer, dancer, entrepreneur, social media influencer, New York Times bestselling author and star on Nickelodeon’s Lip Sync Battle Shorties. Siwa connects with her fans through many channels: via social media she has over 9 million subscribers with over 2 billion views on YouTube, she has over 7.9 million followers on Instagram, over 419,000 Twitter followers, over 17.4 million followers on TikTok (formerly Musical.ly), and over 526,000 likes on Facebook; through her SIWANATOR club, which stands against negativity and bullying; through her global reach of consumer products including her signature bows, accessories, apparel, arts and crafts, cosmetics, home goods and party supplies; and with her hugely popular singles, “Boomerang,” which has been viewed over 662 million times and is RIAA certified platinum, “Kid in a Candy Store,” “Hold The Drama,” and “High Top Shoes.” In 2016, Nickelodeon and Siwa entered an exclusive licensing partnership to develop a line of consumer products inspired by Siwa. Categories span toys, apparel, accessories, consumer electronics, Halloween costumes and more. To date, over 50 million JoJo Bows have been sold. Siwa’s consumer products are available internationally, including the UK, Canada, Australia and Mexico. Siwa recently helped kick off Nickelodeon’s first U.S. SlimeFest event in Chicago in June, a multi-day, sold out music festival for kids and families, where she performed in front of over 24,000 fans. She also performed at Nickelodeon’s second inaugural SlimeFest UK. She toured Australia with live performances of her most popular songs and fashion parades showcasing her branded products, and also performed at Kids’ Choice Mexico. Siwa just launched her first animated shorts series, The JoJo & BowBow Show Show starring Siwa and her furry best friend BowBow. She also works alongside Nick Cannon in Nickelodeon’s hit competition series Lip Sync Battle Shorties. She has also appeared on various Nickelodeon live-action series including School of Rock and The Thundermans. Siwa performed a medley of hits at Nickelodeon’s 2018 Kids’ Choice Awards, including her platinum smash “Boomerang.” She also won two blimps for Favorite Viral Music Artist in 2017 and Musical YouTube Creator in 2018. This summer, she performed at Nickelodeon’s 2018 Kids’ Choice Awards Mexico.