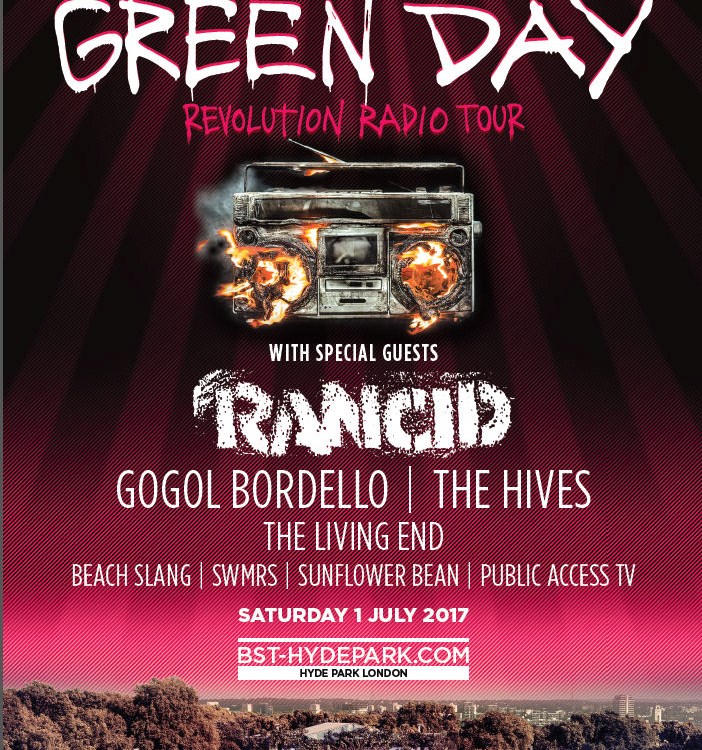 A bit about Green Day

Just when you thought a date with Green Day at Barclaycard presents British Summer Time Hyde Park couldn’t get any better, eight mega bands have been announced, completing the essential rock line up of the summer. Rancid will be hitting Hyde Park in continued support of Green Day’s massive Revolution Radio world tour. Founded by 1980s punk veterans Tim Armstrong and Matt Freeman, Rancid is often credited, along with Green Day, for reviving mainstream interest in punk rock during the mid-1990s. The band’s colossal hits include Ruby Soho and Time Bomb from their platinum-selling album ‘…And Out Come the Wolves’. They have released five groundbreaking albums, selling over four million records worldwide. Off the back of their headlining South American tour this spring, plus their UK and European tour dates with Green Day, the mighty Rancid will be bringing a slice of chaos to the crowds of London this July. Also joining Green Day is New York’s wildest Gypsy punk group, Gogol Bordello. The band rose to mainstream fame in 2005 with the release of their thunderous track Start Wearing Purple, taken from the their third album ‘Gypsy Punks: Underdog World Strike’. The band’s latest album ‘Pura Vida Conspiracy’ was released in 2013. Its title derives from a Spanish slang phrase for “pure life”, a theme that undoubtedly resonates with the band. Known for their theatrical stage shows and the immense force of energy that is Ukranian front man Euguene Katz, Gogol Bordello are guaranteed to set Hyde Park alight. Sweden’s coolest garage band The Hives will be warming up the crowds for Green Day on 1st July. Hailed as one of the best live rock bands of the 21st century, The Hives stormed to stardom in 2000 with the release of album “Veni Vidi Vicious”, including infectious hit Hate To Say I Told You So. Hot off the heels of their European and UK tour this spring, howlin’ lead singer Pelle Almqvis, plus Nicholaus Arson, Vigilante Carlstroem and Chris Dangerous will make their debut Hyde Park appearance this summer.

Australian punk rockers The Living End will also be taking to the stage in support of Green Day. The trio is gearing up for Hyde Park with a tour of their homeland in March before bringing fresh material to the UK from their brand new album “Shift” (out May 13th). Crowds can expect exciting new tunes to combine with classic fan favourites Prisoner of Society and Roll On. Beach Slang first made their mark on the scene with hit Who Would Ever Want Anything So Broken? and have continued to produce punk rock anthems ever since. Known for their unrestrained and even more unapologetic onstage presence, Beach Slang’s set is guaranteed to bring the right amount of chaos to Barclaycard presents British Summer Time Hyde Park this summer. American punk rockers SWMRS have taken influence from the Beach Boys, The Ramones and everything in between to form their very own brand of rock n’ roll. With a series of profound releases since their formation in 2004, this year will see their latest record Drive North’s live debut across the UK in March and then on to the London’s Hyde Park in July. From their beginnings in drummer Jacob Faber’s basement in Brooklyn, Sunflower Bean have come a long way. Having rounded off 2016 with a UK tour in support of their debut album “Human Ceremony”, the trio are making a welcome return to London to give us one hell of a show. Last but not least, new kids on the block Public Access TV have been creating a buzz on their musical journey so far – and for good reason. Having released their debut album in September last year, the band has kick-started 2017 with a US tour and will no doubt be ready to land in London and show us what they’ve got! An epic day filled with epic bands; Green Day will be joined on Saturday 1st July by Rancid, Gogol Bordello, The Hives, The Living End, Beach Slang, SWMRS, Sunflower Bean and Public Access TV – all at Barclaycard presents British Summer Time Hyde Park 2017. Also headlining at Barclaycard presents British Summer Time Hyde Park 2017 is Phil Collins (30th June), Justin Bieber (2nd July), Kings of Leon (6th July), The Killers (8th July) and Tom Petty and the Heartbreakers (9th July). Full supporting line-ups are to be announced. Now approaching its fifth year, Barclaycard presents British Summer Time Hyde Park has been host to some of the biggest and best live acts since its debut in 2013. From The Rolling Stones to Carole King, The Libertines to The Who, Kylie to Stevie Wonder, Black Sabbath to Taylor Swift, music history has been written almost night by night. About Green Day: Since breaking through in 1994 with the Dookie album, Green Day – formed by Billie Joe Armstrong (lead singer), Mike Dirnt (bassist) and Tré Cool (drummer) – have become one of the world’s biggest bands with over 75 million worldwide sales. After a succession of hit albums, their 2004 rock opera American Idiot reignited the band's popularity with a younger generation. Green Day have won five Grammy Awards: Best Alternative Album for Dookie, Best Rock Album for American Idiot, Record of the Year for Boulevard of Broken Dreams, Best Rock Album for the second time for 21st Century Breakdown and Best Musical Show Album for American Idiot: The Original Broadway Cast Recording. They were inducted into the Rock and Roll Hall of Fame in 2015 in what was their first year of eligibility for induction.

- General Admission entry through the main gate - Access to an extensive range of bars, food traders and toilets in the main arena

- Guardian tickets are only valid in multiples of 2 for 1 adult and 1 child.

- General Admission ticket through a dedicated entrance for Priority Entry customers - Entry to the event up to one hour before the gates open to General Admission customers - Access to an extensive range of bars, food traders and toilets in the main arena - Opportunity to stand directly in front of the Great Oak stage. Access to this area is not guaranteed and is on a first come, first served basis. Get down in time for Priority Entry doors to increase your chances of securing a place. Once it’s full, it’s full!

- Dedicated entrance for Barclaycard VIP Summer Garden customers - Entry to the event up to one hour before the main gate opens - Access to premium standing viewing area to watch Great Oak Stage performances, allowing you to leave and return from the Summer Garden into general admission as you wish - Access to the Barclaycard VIP Summer Garden - an exclusive area offering VIP bars, premium food outlets, additional comfortable seating, separate toilet facilities and cloakroom - Access to an extensive range of bars, food traders and toilets in the main arena

- Dedicated entrance for The Terrace customers - Entry to the event up to one hour before the main gate opens - Terrace is our tiered covered standing grandstand from where you will have amazing views of the Great Oak Stage and be able to watch all performances. - Access to the Barclaycard VIP Summer Garden - an exclusive area offering VIP bars, premium food outlets, comfortable seating, separate toilet facilities and cloakroom - Access to an extensive range of bars, food traders and toilets in the main arena

• Times - Gates Open: 13:00 – please note the gates will be open approx. 60 minutes early for those customers who select Priority Entry. • Age restrictions - Anyone under 16 must be accompanied by a parent or guardian (18 or over). Children aged 2 and under will be admitted free of charge. Please note this has changed from this year’s shows. • Disabled Access - All tickets are available via the festival website or AXS.com. There is a Wheelchair platform and an Ambulant area. All tickets come with 1 free personal assistant. • Group Bookings - Only for nonprofit organisations. Please contact 0844 338 8002.. • Ticket Limit - 6 per person 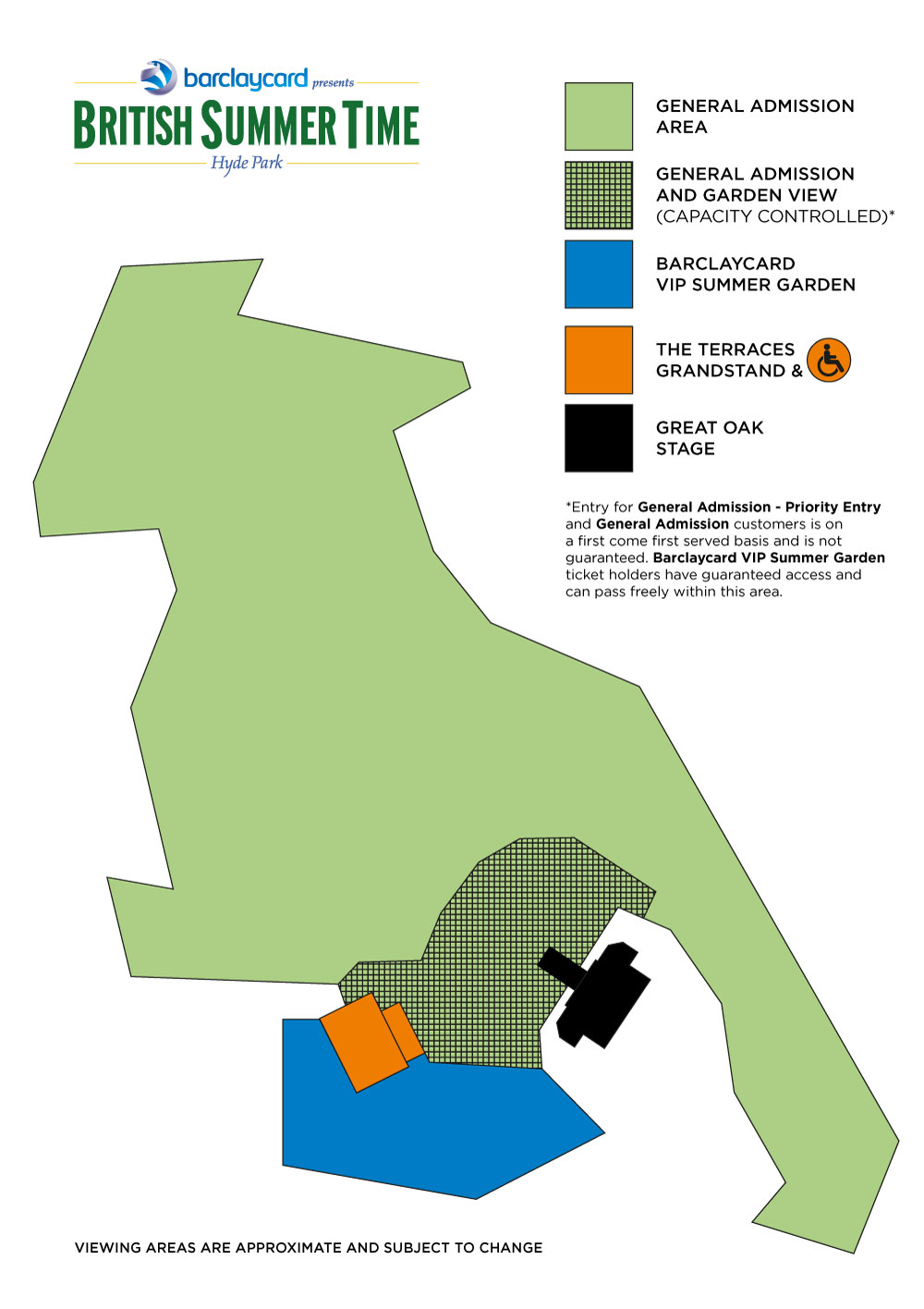