1: Select your preferred tickets
2: At checkout, enter your Barclaycard and the offer will be automatically applied to the ticket price (not applicable on fees)
3: Pay with your Barclaycard 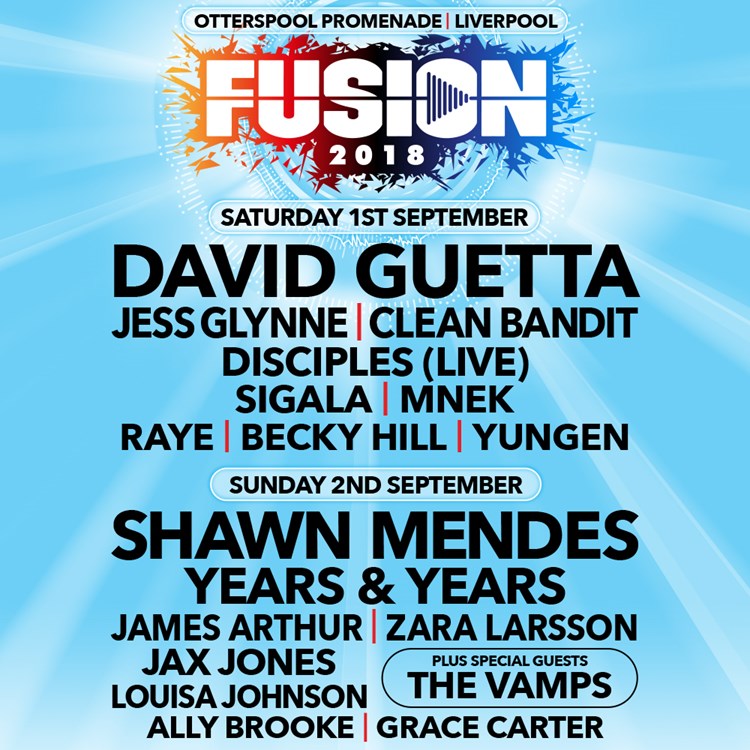 Fusion 2018 is excited to announce its incredible line-up of serial chart toppers. Headlined by international superstars David Guetta and Shawn Mendes, Fusion will once again be bringing some of the world’s biggest artists to Otterspool Promenade, Liverpool. Also appearing across the weekend of 1st - 2nd September will be Clean Bandit, Years & Years, Jess Glynne, Zara Larsson, Sigala, James Arthur, Louisa Johnson, Jax Jones, MNEK and Disciples. David Guetta is one of the world’s biggest and most successful DJs with a career spanning three decades. Guetta has collaborated with top international stars including Rihanna, Usher, Kelly Rowland and Nicki Minaj to produce some of the greatest hit-making dance numbers of all time. The French DJ has sold a staggering eight million singles,1.3 million albums and secured six official Number One singles. Saturday’s full line up promises hit after hit, with ‘Symphony’ ‘Rockabye’ and ‘Rather Be’ stars Clean Bandit, soulful singer-songwriter Jess Glynne, Sigala, MNEK and Disciples all set to take the stage by storm. David Guetta says: “I can’t wait to perform at Fusion for the first time. The line up is awesome and I’m honoured to be a part of it. I look forward to seeing all my UK fans there!’ Sunday’s headliner, Shawn Mendes, has brought us mega-hits ‘Mercy’, ‘Treat You better’, ‘There’s Nothing Holdin’ You Back’ and the mighty Number One single ‘Stitches’. Since opening for Taylor Swift’s ‘The 1989 World Tour’ in 2015, the Canadian singer has bagged multiple awards and last year sold out his first world tour in minutes at the age of 18. He is now gracing Liverpool’s Otterspool Promenande for Fusion 2018 with his numerous hits, headlining the last night of what will be the greatest pop event this summer. Shawn will be joined by a star studded line up including the incredible Years & Years, Swedish pop powerhouse Zara Larsson, X factor stars James Arthur & Louisa Johnson and BRIT nominated DJ and producer Jax Jones. Shawn Mendes says: “I’m so excited to be headlining Fusion this year. So many awesome musicians have played the festival in the past and I've heard its incredible. Can’t wait to see you all!” Zara Larsson says: “I love the UK and especially all of my fans over there so I can’t wait to come back to perform at Fusion 2018!” Now in its 6th year, Fusion is again teaming up with Liverpool’s Number One hit music station, Capital Liverpool, to promise music fans the biggest pop anthems and an unmissable festival line up of the summer on the banks of the River Mersey. Capital will also give listeners the chance to win tickets to Fusion 2018. Damien Sanders, Event Director of Fusion Festival said: “Every year Fusion grows and the line up is filled with more superstars. From Ed Sheeran to Little Mix and Take That to Ne-Yo, we never disappoint, and Fusion 2018 will once again impress the crowds with the biggest acts of the year playing including David Guetta and Shawn Mendes! We are delighted to be partnering with Capital Liverpool once more and can’t wait to round off the summer with the biggest pop music event of the year!”