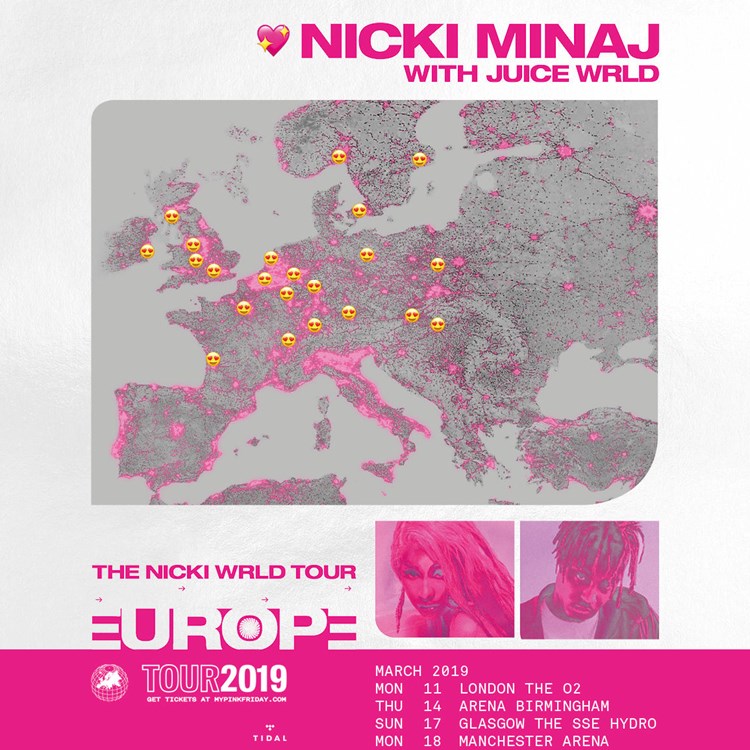 Global hip-hop icon NICKI MINAJ has announced new details for her highly anticipated world tour, which will kick off on February 21st in Munich, Germany and cross 22 cities throughout Europe. MINAJ has decided to move forward with new creative that will give her fans a fully immersive Queen experience. In addition, the tour will now feature Chicago rapper JUICE WRLD, who is replacing FUTURE on the tour. Juice WRLD has had a breakout year with his platinum selling debut album Goodbye & Good Riddance, and multi-platinum selling singles "All Girls Are the Same" and "Lucid Dreams.” “I’m so excited to bring the full Nicki Minaj experience to my fans in Europe,” said MINAJ. “My creative director & I have been carefully crafting the most exhilarating, unique, memorable piece of art to share with my incredible fans. I’m in love with Juice WRLD’s music & feel so stoked to have him join me. This will be one for the books.” What’s more, MINAJ will be inviting local acts from each country to join THE NICKI WRLD TOUR in their city. Similar to her wildly successful & critically acclaimed Pinkprint Tour, Minaj’s upcoming dates will offer fans access into Nicki’s world and be full of surprises. Throughout the years, NICKI MINAJ has consistently made history and influenced all corners of pop culture. In 2018, MINAJ released her platinum-selling album Queen, and became the first female artist with 100 career appearances on the Billboard Hot 100 chart.